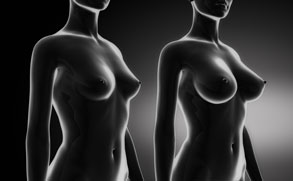 Inverted nipple/s is a condition in which one or both nipples points’ inward instead of outward. The nipple ducts are shorter than normal and there is a tethering or pulling inward of the nipple so that the nipple lies flat against the breast. It is a common problem, occurring in both men and women. In persons born with inverted nipples, the nipple may temporarily protrude with stimulation. For women, pregnancy and breastfeeding may temporarily or permanently correct itself, though some women with inverted nipples may have difficulty breastfeeding.

There are three (3) grades of inverted nipples.

Grade 1: Slightly inverted nipples that withdraw gradually from the outward to the inverted position. Grade 1 is the least likely to need corrective surgery unless the patient has concerns about their appearance. Women assessed as Grade 1 can use alternative methods of nipple correction and will generally be able to breastfeed.

Grade 2: Nipple inversion is where nipples turn outward with more difficulty than for grade 1, though breastfeeding may still be possible with this higher assessment. Corrective surgery to correct a Grade 2 assessment can involve dividing or lengthening the milk ducts.

A Grade 3 assessment for inverted nipples is where the inward pull of the milk ducts is such that the nipple rarely or never turns outward. In this case, the very short milk ducts are too tight for the nipple to be corrected to turn outward without surgery.

If nipple retraction occurs in adulthood it is recommended to be assessed to rule out an underlying breast cancer has not caused the retraction. See your regular Doctor for a check-up and possible mammogram.

The procedure for correcting inverted nipples consists of an incision being made at the base of the nipple on the areola. The shortened milk ducts are detached and sutured with a purse string suture allowing for projection of the nipple. The milk ducts may also be preserved in the nipple repair.

How long does the surgery take?

The surgery is performed as a day surgery and generally takes about one hour.
There is only minimal pain which can easily be controlled by medication. Post-operative bruising and swelling is dependent on whether you tend to bruise or swell easily. Bruising is usually minimal and swelling will be present for 2 – 7 days post-surgery.

Cold Compresses will help to relieve pain and swelling.

You will have stitches around the nipple and a nipple shield to protect the nipple which will remain for 4 to 10 days post-surgery. Any dressings covering the nipples may be removed when instructed by your Doctor. You will be able to resume most activities within 24 to 48 hours post-surgery.

Price of Inverted Nipple Repair
Repair of one nipple: $1200
Repair of two nipples: $2000

Make An Enquiry. We Will Reply